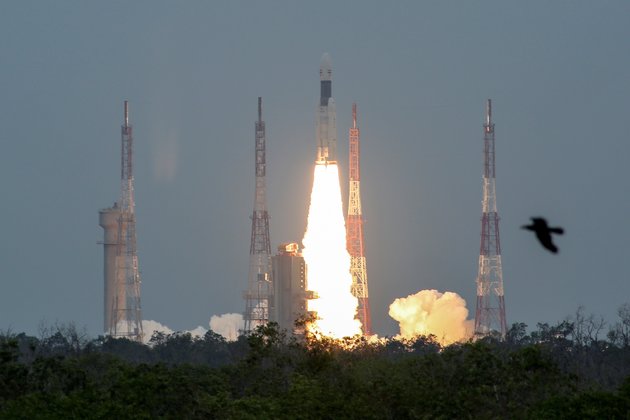 NEW DELHI - India successfully launched an ambitious mission to land a rover on an unexplored area of the moon as a rocket hurtled into space from Sriharikota in eastern India.

In a feat attempted by only three countries so far - the United States, Russia and China - the project aims to make a soft landing on the moon and seal India's reputation as a leading space power.

The launch on Monday afternoon came a week after the high profile lunar mission was abruptly aborted less than an hour before takeoff due to a "technical snag."

After a live telecast showed the Chandrayaan-2 taking off, onlookers cheered and scientists clapped and hugged in the control room. The head of the Indian Space Research Organization, K. Sivan, called it the "beginning of a historical journey of India toward the moon" and said they had "bounced back with flying colors."

Chandrayaan-2 is India's second mission to the moon the first one in 2008 did not involve a robotic probe on the lunar surface.

It comes at a time when the Earth's nearest cosmic neighbor again emerges as the focus of exploration by space faring countries and two days after the 50th anniversary celebrations of US astronaut Neil Armstrong's iconic walk of the moon.

India is hoping to become the first country to conduct studies of the moon's South Pole where no country has ventured so far.

The key challenge will come after 48 days when the lander will separate from the main spacecraft to land on the moon. "The D-day will come and that day we will experience 15 minutes of terror to ensure safe landing near South Pole," Sivan said.

If successful, a 27-kilogram rover carried by the lander will search for water and minerals and conduct experiments for two weeks on the lunar surface to establish the "fossil record" of the solar system. It can travel up to a half a kilometer from the lander and will send data and images back to Earth.

According to local media, the "technical snag" that prompted the postponement of the launch was a fuel leak in the rocket.

India's space achievements are a source of pride for the country. "Reaching greater heights is part physics and part faith" the Indian space agency tweeted ahead of the launch and thanked the public for giving them "more than enough of the latter."

India's first moon mission helped confirm the presence of water on the lunar surface. In 2014 India conducted a successful mission to Mars.

Chandrayaan-2 is its most ambitious space project to date and hopes to demonstrate India's technological prowess. The orbiter, the lander, and the rover involved in the mission have been indigenously designed. "We will make the Indian flag fly high in the technology area," an optimistic Sivan said after the launch.

Although its space program is smaller than that of countries like the U.S. and China, India has set ambitious targets and hopes carry out a manned space mission by 2022.

Analysts say that the country is keen not to be left behind by countries like China, which has hugely expanded its space program. It made a landing on the far side of the moon earlier this year.

"Clearly there is Asian nationalism, Asian competition within the space realm," according to Rajeswari Pillai Rajagopalan at the Observer Research Foundation in New Delhi.

India is also sealing its reputation for carrying space missions that cost a fraction of the money spent by Western countries. The price tag of the latest lunar mission is around $141 million.

Besides giving a new dimension to India's space ambitions, the mission has also thrown the spotlight on women scientists - in a first for India, two women, Muthyya Vanitha and Ritu Karidhal have been at the helm of the project.